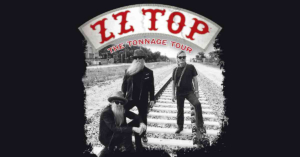 (Halifax, NS) – evenko and Live Nation present ZZ TOP at Harbour Station in Saint John on August 13 and at the Credit Union Place in Summerside on August 14. Both shows start at 8 p.m.

The legendary rockers announced new dates to The Tonnage Tour. After the acclaimed and successful tour in 2014, the band is ready to come back to Eastern Canada and is more than ready to play at Harbour Station and Credit Union Place.

ZZ TOP lay undisputed claim to being the longest running major rock band with original personnel intact and, in 2004, the Texas trio was inducted into the Rock and Roll Hall of Fame. Of course, there are only three of them – Billy F Gibbons, Dusty Hill, Frank Beard — but it’s still a remarkable achievement that they’re still very much together after almost 50 years of rock, blues, and boogie on the road and in the studio.  “Yeah,” says Billy, guitarist extraordinaire, “we’re the same three guys, bashing out the same three chords.”  With the release of each of their albums the band has explored new ground in terms of both their sonic approach and the material they’ve recorded. ZZ TOP is the same but always changing.

ZZ TOP’s career retrospective The Very Baddest surfaced in 2014. It spans the entire course of their London, Warner Bros. and RCA years. Listeners can follow the evolution of the band’s sound from the early 70s into the 00s on either a 40-track double CD or a 20-track single CD. That same year Eagle Rock Entertainment released Live at Montreux 2013 on both Blu-ray and DVD formats, showcasing their live act, leaving no doubt as to why they have been such a huge concert draw for the last several decades. When it comes to the live experience, they’ve still got it. 2016 saw the release of ZZ TOP’s Live! Greatest Hits From Around The World album on Suretone, consisting of 15 songs recorded live in 13 cities across three continents.

ZZ TOP’s music is always instantly recognizable, eminently powerful, profoundly soulful and 100% Texas American in derivation.  The band’s support for the blues is unwavering both as interpreters of the music and preservers of its legacy. They have sold millions of records over the course of their career, have been officially designated as Heroes of The State of Texas, have been referenced in countless cartoons and sitcoms and are true rock icons but, against all odds, they’re really just doing what they’ve always done.  They’re real and they’re surreal and they’re ZZ TOP.

For all tour dates, visit: ZZTOP.com/tour.

About evenko
evenko is a Quebec company which is the most important independent promoter and producer in Canada. Presenting more than 1,200 musical, family and sporting events annually throughout the province of Quebec, Atlantic Canada and the eastern United States, evenko plays host to the biggest entertainers in the world and invests in the development and promotion of Quebec artists. It is the creator and producer of: Osheaga Music and Arts Festival, Heavy Montréal, îleSoniq, ’77 Montréal all held at Parc Jean-Drapeau in Montreal, the Festival YUL EAT and Electro Parade Montreal. Moreover, evenko is the exclusive manager of the Bell Centre, the Corona Theatre, MTelus, Place Bell in Laval, L’Étoile Banque Nationale and Le Club Dix30 in Brossard. evenko is consistently ranked as the top independent promoter in Canada while also earning its place in the top 10 of the most important promoters in North America (Pollstar) and top 20 promoters worldwide (Billboard). The evenko trademark is the property of l’Aréna des Canadiens Inc.