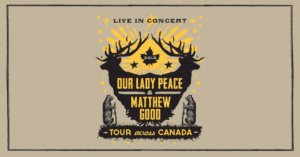 (Halifax, NS) – evenko and Live Nation present Canadian rock legends, Our Lady Peace and Matthew Good at the Mile One Centre in St. John’s, March 1, Casino New Brunswick in Moncton, March 3 and at the Scotiabank Centre in Halifax, March 5. Shows start at 7:30 p.m.

A full list of performance dates, tickets and VIP packages for the tour will be available through both artists’ websites with fan clubs starting November 17th. The public on-sale starts November 24 at 10 a.m. The tour runs from March 1 through March 31, 2018 coast to coast, with shows lined up from St. John’s to Vancouver. For all of the details, visit matthewgood.org/shows and ourladypeace.com. VIP packages for both artists will be available smarturl.it/OLPMattVIP.

For this tour, Matthew Good and Our Lady Peace have partnered with PLUS1 so that $1 from every ticket will go to support War Child Canada and their work with war-affected communities to help children reclaim their childhood through access to education, opportunity and justice. For more details on Plus 1 go to plus1.org and for more on War Child Canada go to warchild.ca.

“We are very excited to announce the upcoming cross Canada tour with Matt Good. Matt and I have been busy making sure this an amazing collaborative event that our fans will not soon forget.” – Raine Maida

“I’m excited to get out on the road with Our Lady Peace. We’ve long been threatening to do this, and it’s finally happening.” – Matthew Good

Matthew Good’s new record, Something Like A Storm, was released Oct 27 and debuted in the top 5. His second single, “There The First Time” is out at radio now. To date, Good’s studio albums have combined for nearly one million albums sold in Canada alone. He has also been nominated for an incredible 21 JUNO Awards, including one for his last album studio album, Chaotic Neutral.

Our Lady Peace is one of the most successful bands in Canada today. The band has sold over five million albums worldwide, won four JUNO Awards and ten Much Music Video Awards – one of the most MMVA’s ever awarded to any artist or group. Our Lady Peace’s four song EP, Somethingness Vol. 1 came out in October of 2017 and features the song “Drop Me In The Water”. Somethingness Vol 2 will come out early in 2018.

For all the latest news for Our Lady Peace check out ourladypeace.com and follow their socials and YouTube channel at @ourladypeace.

Tickets for the St. John’s show range in price from $52.00 – $82.00 (including tax and applicable surcharge) and will be available at the Mile One Centre Box Office, by calling (709) 576-7657 and online at mileonecentre.com, evenko.ca and livenation.com.

Tickets for the Moncton show range in price from $72.03 – $92.03 (including tax and applicable surcharge) and will be available at the Casino Gift Shop (located at 21 Casino Drive in Moncton, exit #450 off the Trans-Canada Highway), by calling
1-866-943-8849 and online at casinonb.ca/casino/, evenko.ca and livenation.com.

Tickets for the Halifax show range in price from $55.00 – $85.00 (including tax and applicable surcharge) and will be available at the Ticket Atlantic Box Office at the Scotiabank Centre, at participating Atlantic Superstore outlets, by calling (902) 451-1221 / 1-877-451-1221 and online at ticketatlantic.com, evenko.ca and livenation.com.

About evenko
evenko is a Quebec company which is the most important independent promoter and producer in Canada. Presenting more than 1,200 musical, family and sporting events annually throughout the province of Quebec, Atlantic Canada and the eastern United States, evenko plays host to the biggest entertainers in the world and invests in the development and promotion of Quebec artists. It is the creator and producer of: Osheaga Music and Arts Festival, HEAVY MONTRÉAL, îleSoniq, ’77 Montréal all held at Parc Jean-Drapeau in Montreal, the Festival YUL EAT which takes place at the Old Port of Montreal and Electro Parade Montreal. evenko is also the promoter of the Montreal ePrix for the FIA Formula E Championship. Moreover, evenko is the exclusive manager of the Bell Centre, the Corona Theatre, Place Bell in Laval, L’Étoile Banque Nationale and Le Club Dix30 in Brossard. In January 2017, Pollstar, the entertainment industry’s most respected source, ranked evenko as the top independent promoter in Canada and the 10th most important promoter in North America. The evenko trademark is the property of L’Aréna des Canadiens Inc.