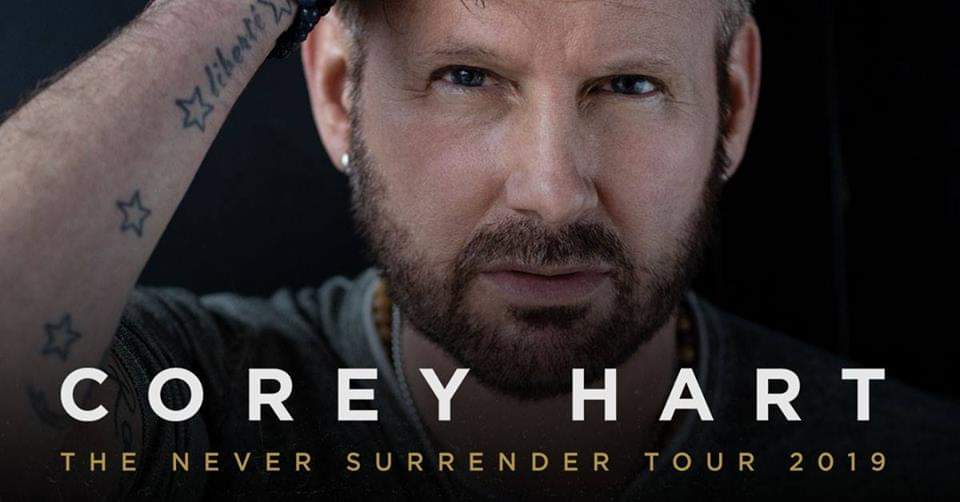 (Halifax, NS) – evenko and Live Nation present Corey Hart live at Mile One Centre in
St. John’s, May 31, the Scotiabank Centre in Halifax, June 4 and the Avenir Centre in Moncton, June 5. Showtime is 7 p.m.

Canadian musical icon, Corey Hart has announced the details of his first major arena tour across Canada since 1986. Produced by Live Nation, The Never Surrender Tour kicks off in St. John’s, NL on May 31 (Corey’s Birthday) and will follow the May 3, 2019 release of Hart’s new record, Dreaming Time Again. Special guests to be announced soon.

Tickets for The Never Surrender Tour will go on sale to the general public on Friday, December 7 at 10 a.m. Fans can visit Corey Hart’s Facebook page for exclusive presale details: www.facebook.com/coreyhartofficial.

Each ticket purchased for the Never Surrender Tour comes with a digital copy of Hart’s new EP when it is released, May 3, 2019.

Tickets for the St. John’s show will be available at the Mile One Centre Box Office (50 New Gower St.), by calling (709) 576-7657 and online at mileonecentre.com, evenko.ca and livenation.com.

Tickets for the Halifax show range in price from $59.75 – $113.75 (including tax and applicable service charge) and will be available at the Ticket Atlantic Box Office at the Scotiabank Centre, at participating Atlantic Superstore outlets, by calling (902) 451-1221 / 1-877-451-1221 and online at ticketatlantic.com, evenko.ca and livenation.com

Tickets for the Moncton show range in price from $65.80 – $124.10 (including tax and applicable service charge) and will be available by phone at 1-855-985-5000 and online at avenircentre.com, evenko.ca and livenation.com. Tickets will be available in person at the Avenir Centre Box Office (150 Canada Street) beginning on Monday, Dec. 10 at 9 a.m.

Dreaming Time Again, Hart’s first studio collection of songs in over 20 years was produced by the legendary Bob Ezrin and will feature the title track and first official single which will be available January 14, 2019.

As prelude to the official single’s release, Corey Hart has launched the seasonal track “Another December” which will be included on the EP. The video for “Another December” is available now: https://youtu.be/1azeQ-9rTmI. The five song EP also includes the up-tempo rocker “First Rodeo” featuring Jim Cuddy on vocals. Fans can stream/download “Another December” HERE.

Having sold over 16 million records worldwide by amassing 9 consecutive US Billboard Top 40 Hits and scoring an impressive 31 top 40 singles in his native Canada (Including 12 – Top 10 Hits), Hart is a Grammy nominated ASCAP, multiple Juno and Quebec ADISQ award winner, and was inducted into Canada’s prestigious Walk Of Fame in 2016.

His brooding good looks and James Dean persona became larger than life during the 80´s – where he was regularly mobbed by frenzied fan adulation.

Hart’s iconic debut single, “Sunglasses At Night” was an international sensation propelling the young musician to the summit of the pop world.

The video became a staple on MTV during the summer of 1984 and claimed the first ever Juno awarded in the Video Of The Year category that same year. His sophomore album “Boy In The Box” achieved Diamond status certification (one million plus sales) faster than any other Canadian artist in history by spawning four hit singles lead by his classic anthem “Never Surrender” which spent nine weeks at number one in Canada, winning Single of the Year at the Juno Awards in 1985.

Corey has performed in arenas from Montreal to Manila – from Tokyo to Toronto where he sold out the 25,000 capacity CNE Grandstand in 1985.