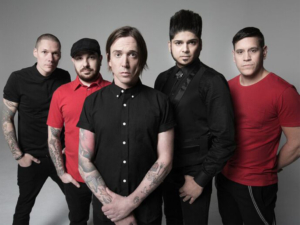 (Halifax, NS) – Warner Music Canada recording artists Billy Talent will begin 2017 on a high note, heading out on a coast-to-coast Canadian tour, including performances at Casino New Brunswick in Moncton on Sunday, March 5 and Scotiabank Centre in Halifax on Monday, March 6. Joining the band on tour are fellow Canadian rockers Monster Truck and The Dirty Nil.

Billy Talent are touring in support of Afraid of Heights, their new studio album. The album, their first in five years, topped the Canadian Neilsen Soundscan Top Albums chart upon its release in late July, marking the fourth consecutive #1 album for the group. In addition to the domestic success, Afraid of Heights also debuted in the top spot in Germany, Switzerland and Austria. What’s more, the lead single “Afraid of Heights” also reached #1 on Canadian Rock Radio, joining “Rusted from the Rain,” Stand up and Run,” and “Surprise Surprise” as chart topping hits for the band. To continue their radio domination, Billy Talent are also releasing their new single “Louder than the DJ” today in conjunction with the tour announcement.

Watch Louder Than the DJ: https://youtu.be/9jwfOcWsv-E

In the 13 years since their inception, Billy Talent sold nearly one million albums in Canada alone and nearly 3 million albums internationally. Their albums Billy Talent I and II and III have all received multi-platinum certifications, with platinum status for the last studio album Dead Silence. The band has enjoyed tremendous success at Canadian rock radio where they have had three #1 hits that combined for 20 weeks at the top spot, six Top 5 hits, and six Top 10 hits.

Halifax tickets are $49.25, $59.25 and $69.25 (including tax and service fee) and will be available at 12 noon at the Ticket Atlantic box office in Scotiabank Centre, participating Atlantic Superstores, by phone at (902) 451-1221 and online at sonicconcerts.com. Additional fees may apply. Doors open at 7 p.m.

Billy Talent has partnered with Plus 1 on this tour to support two Canadian charities. $1 from every ticket sold goes to support MusiCounts, a Canadian non-profit organization that provides schools with musical instruments (www.musicounts.ca) and F.U.MS, a foundation that creates a series of events to support Canadian youth affected by Multiple Sclerosis (http://turningangerintohope.com/).