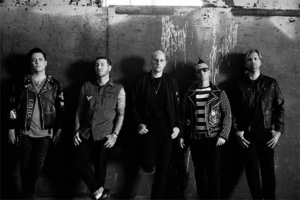 Avenged Sevenfold became one of the world’s biggest rock bands by creating a sound that broke through obstacles of language, distance and culture. They raised the stakes and standards for the genre with a string of blockbuster albums, including their 2005 platinum-selling breakthrough, City Of Evil, 2007’s platinum selling Avenged Sevenfold and two consecutive No. 1’s on Billboard’s Top 200 Albums chart: 2010’s Nightmare and 2013’s Hail To The King.

They’ve achieved Diamond, Platinum and Gold awards for album sales in nearly a dozen countries, racked up over a billion video views and a billion-plus Spotify streams, have consistently been one of the most-played bands on rock radio for over a decade with multiple No. 1 singles, and have headlined arenas and the biggest rock festivals around the globe, amassing a diehard international fan base whose members number in the millions. Their most recent release, The Stage, is a work of immense scope and ambition tied together by an Artificial Intelligence theme. Inspired by the writings of Carl Sagan and Elon Musk, the album is the band’s first thematic release and its epic 15-minute-plus closing track, “Exist,” features a guest appearance by award-winning astrophysicist Neil deGrasse Tyson giving a spoken word performance he penned specifically for the album. The album hit No. 1 on Billboard’s Rock, Hard Rock and Alternative Albums charts and drew praise from a plethora of outlets, among them Rolling Stone, NME, Q, The Guardian, Guitar World, Metal Hammer, Revolver, Loudwire, Metal Injection, Alternative Press, Drum, Total Guitar and Classic Rock, with the latter calling it “a metal masterpiece.”