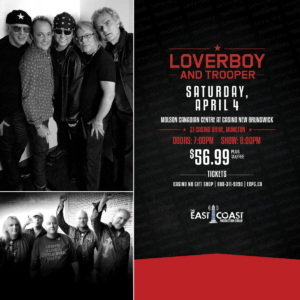 The East Coast Production Group invites you to join us when two Canadian music groups LOVERBOY and TROOPER perform live at the Molson Canadian Centre in Moncton, April 4, 2020!For more than 30 years, LOVERBOY has been “Working for the Weekend” (and on weekends), delighting audiences around the world!  Having sold more than 10 million albums, earning four multi-platinum plaques (including the four-million-selling Get Lucky), and a trio of double-platinum releases they also won six Juno awards in 1982.  The group was one of the top 5 grossing touring acts in the world, performing in over 100 cities across the U.S. and Canada!

TROOPER’s story goes like this: millions of records, a couple dozen hits, a Juno Award for Band of the Year and ongoing sold-out shows across Canada to this day. Universal Music acknowledges them as “one of Canada’s top five selling bands of all time” and the Vancouver Sun has called them “Canadian rock heroes of the first order … the best performing band in Canada”.  They continue to perform their huge collection of hits with the vitality and sense of humor that has served them well on their steady march through the hills and valleys of Canadian Rock and Roll.

Tickets for this double-bill all ages event start at $56.99 each (+ tax/fee) and are ON SALE NOW! Doors open at 7pm with TROOPER taking the stage at 8pm.